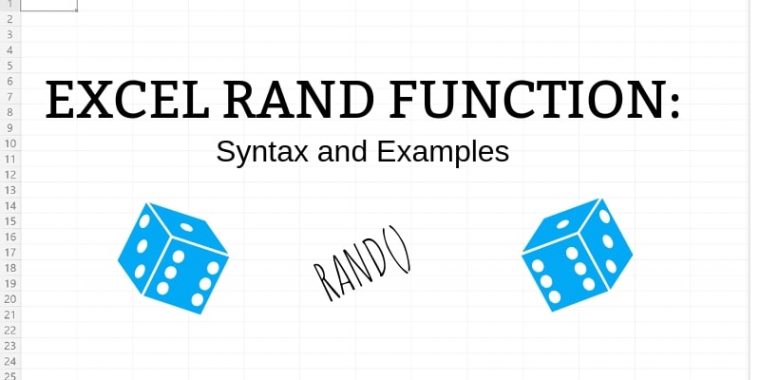 The RAND is an Excel math and trigonometry function that returns a random value between 0 and 1. Excel uses the Mersenne Twister algorithm for this.

It is one of the oldest Excel functions, so it can be used even with Excel 2003.

The RAND function does not take any arguments.

When used on its own, RAND will return a random number between 0 and 1. For example 0.

Note: The value will change every time you make any changes to your sheet or reopen it. See here to prevent this from happening.

Generate a Random Real Number from a Range

To generate a random real number withing a range, use the following formula:

For example, to generate a number between 20 and 30, the formula would be:

Note: A simpler way would be to use the RANDBETWEEN() function.

To generate a random whole number, use the following formula:

RAND is recalculated every time you make a change in your worksheet or open it again. But if you want to manually recalculate RAND, press F9 and it will generate a new number for you.

Note: Pressing F9 will recalculate RAND in every cell with this formula, not just the one that is selected.

If you want to stop the cell from recalculating, there are two options:

Using either of these options will leave you with a value instead of the formula.

To generate more than one random number, select the cells, enter RAND() in the formula bar and press Ctrl + Enter.

RAND function can also be used to calculate a random time. To do this, you’ll need to change the cell’s number format to “Time”.

More Examples and Use Cases

We don’t have any use cases for this formula on our website at this moment, but will link them below once we have. Stay tuned!